I believe this is paradise and I'm here to convince you 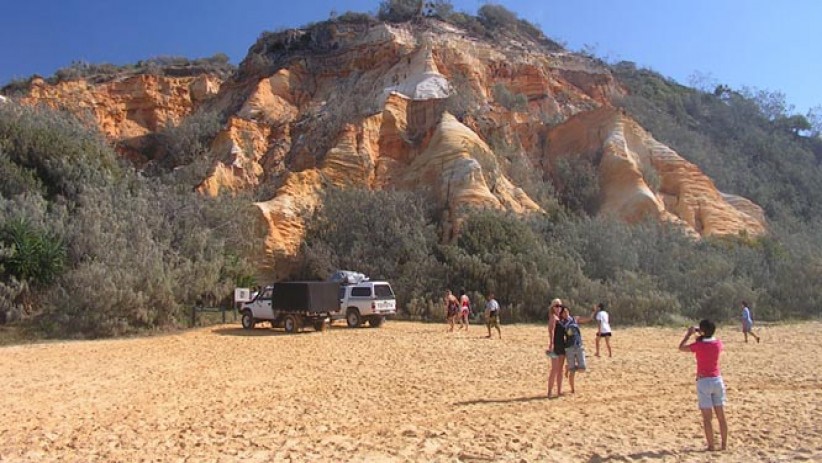 This was the first words from our guide, Andrew, when we drove off the ferry from Rainbow beach and started our journey along the beach and inland. The tour was from Tuesday to Thursday and it was 3 packed days. However,you did not feel it during the day. But in the evening at the dinnertable you could feel the walks in your legs and it had been a long day.

The tour started with an early pick up on the Gold Coast and then driving North with possibility of pick up in Brisbane and Noosa. We arrived on Fraser Island in the beginning of the afternoon. We were met by beautiful beaches and blue and clear water. We arrived on the west side of the island and drove across to the eastern side. This was here we would spend most of our time on the trip.

First stop for the day was at Lake Wabby. A fresh water lake that once was running into the sea but is now held up by sand. At first you are just met by the sight of what could be a mini desert in the middle of the island.  However, suddenly a lake appear. The scenery was amazing! A lake in the middle surrounded by sand on one side and hills with forest on the other side under a clear blue sky.

After a dip in the lake and just enjoying the view from here we went back on the walking track and to the truck and continue on the beach. The beach is called 75 mile beach (because of the length of it. It goes from the south and all the way to Indian Head which is in the north of the island. On our way to Eurong Resort where we were staying for the trip we had a stop at Eli Creek – a clear fresh water creek. Jump on a tube and drift down the creek and enjoy. The flow of water in the creek can fill up an Olympic pool for competition in about half an hour. The last stop of our first day was at some of the many coffee rocks. It is interesting how they are former. And just because they are called coffee rocks do not take for granted it tastes like coffee J

Wednesday started early with breakfast at 6:30am. A continental breakfast which had what was necessary. If we wanted warm food we could buy that for an extra $8. Fuelled and ready for a good day we headed out and drove to Kirrar Sandblow. This amazing place to come to after a short walk in the woods. Suddenly there is just a lot of sand in front of you. The weather and past events has compressed and former the landscape. It looks like small bumps in the sand. However, this is just because these spots has been under a bigger pressure in the past than the surroundings. With the wind and sandblow the most compressed areas does still stand while the sand around blows away. The colour of the sand is in all shapes going from white to yellow to red due to the about of iron oxide. Once again an incredible view with this huge area of sand surrounded by trees and far away you could see the ocean. I regret not running to the top and get probably an even more spectacular view over the area. I have to do that next time I go to Fraser Island.

Next stop: Indian Head. A view point where you on a clear day can see far south on the beach we were traveling on. And on the other side you can look all the way to the Champagne Pools and inland. We were so lucky while we were there to spot a couple of whales on their journey. Unfortunately, the weather was not with us at the moment we arrived so the view was not as great as we were told it could be. But it was still a great view.

Most of the time the drive on the island is on plain or almost plain and stable sand. But there were also a lot of times where the truck had to go in the low gears and really show what it was made of. The fairly short drive from Indian Head to the Champagne Pools was one of the times where the truck had to show what it got. It was beginning to be high tide which means we had to drive in the much softer sand. We arrived safely after quite a bumpy ride. The truck did well and came through the whole trip without any problems.

I found the Champagne Pools a difficult thing to categorise. If you just look at it as it is, it is a couple of big rock pools where the waves fills them up. Does not sound exciting at all. I still had to go in and see what the fuzz was about even though the conditions were not the best. The waves does actually create some kind of a bubbly feeling when you are in there. Plus, when a wave hit the rocks and water run down them it gives so quite amazing views. After my dip back to the truck and it had to work again so we could get to our lunch spot of the day. A typical Australian BBQ set up at the back of the truck with a view over the ocean. Of course, the only time it rained on our trip was while we were setting up for it.

On our way back to Eurong we had a stop at The Pinnacles, The Maheno and Eli Creek one more time. The Pinnacles are something similar to Kirrar Sandblow. It is smaller and you can’t access it because of a fence. So it is more a thing just to see; see the curves the weather creates and the different colours in the sand. The Maheno is a shipwreck which was the fastest ship at its time. It was sailing between New Zealand and Australia before it was shipped to Europe as a hospital ship under World War 1. After it had done it duties it continued to sail until the middle of 1930’s where it was sold for scrap. It was then towed to its new owners in Japan. But outside of Queensland it hit a storm and got loose and drifted. It ended up where it is today – on the shore of Fraser Island. Nobody had the resources to move it which is why it still is there today. An amazing ship that has degenerated for ages. We decided to have an early night with breakfast at 6:30am again Thursday.

Fraser Island more or less have it all. It got beautiful beaches, incredible lookout points, creeks and lakes with clear water. This last day we were to experience another of the lakes – Lake Birrabean. Beautiful white sand beaches (they are white because the sand contains a lot of silica). You can rub yur skin with the sand without it hurts and afterwards you have soft skin. This was only a short sop before we went into the rainforest and on to the walking track. A must do walking track on the island! A tree wider than I am high, you can use one the trees as a swing on the way (did not do it – not sure whether it would hold but apparently it is possible) and the Wangoolba Creek (aboriginal for the Invisible Creek). If you didn’t know it was there you would not have seen it just a little away from it – it does not make a sound because it flows on sand.

This was the last stop on our trip and what an amazing trip it has been. Was Andrew, our guide, right about his first statement on the trip? Probably yes. It has everything and it such a beautiful place. It is not a place for activities but if you need a break and just need to relax and see beautiful things – definitely a place to go. It is also a way of cutting the line to the rest of the world. There is almost no cell service so it is really a place where you have the opportunity to completely forget everything and just enjoy the island. It is not the last time I went there. And on a last note: It is a perfect place for stargazing!